MG Leonard is the author of the Beetle Boy trilogy of books, and her latest book is the Beetle Collector’s Handbook. 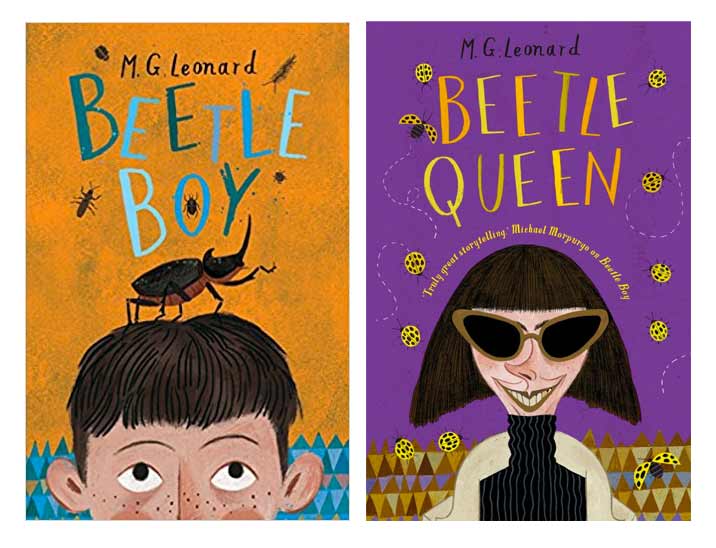 MG Leonard is the author of the Beetle Boy trilogy of books, and her latest book, is the Beetle Collector’s Handbook. An interest in gardening inspired her to overcome her fear of insects and learn more about the insect world. Leonard then spent six years researching beetles for her Beetle Boy books and now shares her passion taking beetles on school visits.

I didn’t identify as a science person. It felt to me that schools used to say you’re either a science person or an artsy person, you were never both.  As an adult I figured out that it wasn’t really to do with aptitude, if you apply yourself for long enough you can understand anything, you just have to want to.

One of the things I feel very strongly about now – and that I wish had been part of education as a child – is that there should be more varied approaches to scientific subjects. It was almost like a comprehension test, if you don’t understand then tough luck. In my role as Digital Producer at the National Theatre I am now a massive advocate for putting the A into science subjects and promoting STEAM.

You started writing about insects after being unable to find a fun insect book for your son. What would you say is the importance of having an ‘I don’t know anything’ moment?

When I was young I wasn’t that concerned about ignorance. I genuinely thought I knew what insects were, and I had a phobia so I didn’t want to go near them, I hated them! I noticed my son – then a baby – exhibiting acute fear of a bluebottle fly as it buzzed around the house and I realised my behaviour was teaching him something that wasn’t positive.

I had no idea, if you learnt about something you wouldn't be scared of it. Now I pick up insects and handle them all the time. Parents love my books because they learn something too, so when they go for a walk they can explore together.

Children are natural scientists, observing and classifying objects. How do they respond to beetles?

I’ve had so many instances going into schools where I’ve been warned about phobic children and invariably those children are holding a beetle. Children have curiosity which helps them combat their fears – parents and teachers are worse, I’ve never had a child freak out and run away!

In a school in Fife we had a giant African flower beetle. Beetles are pretty rubbish at flying and I know, as the insect handler, that they will fly and drop and that’s it. This beetle, the size of a bird, flew and one of the teachers screamed, ran out and refused to come in. The children were delighted and captivated! They will not forget that day.

What is it about insects that has captivated you so much?

People love the Marvel universe, but the Marvel has nothing on beetles! If you did an audit of every superhero ever, you could match it with beetles. Beetles are all heroic, whether it's super strength or firing acid out of their butts! You can never be bored when studying beetles – just this week the Smithsonian tweeted that there are millions of species we haven't discovered, because we’re obsessed with BIG!  Invertebrates give me real hope to all my fears and guilt about climate and the planet. We think the world is ours, but the micro world is surprising in ways we don't even begin to understand. It’s arrogance to think we will destroy the planet – we will destroy ourselves, the beetles will be fine!

What are your favourite three beetles and why?

Shoutout to the Australian rainbow stag beetle, they're the ones I breed and take into schools. These beetles love fruit, I show kids in schools how they love eating strawberry jelly and that blows their minds. They’re really impressive size wise and they're iridescent, really quite beautiful.

I love the tiger beetle! They've got really sharp horrible teeth; if you look at a close-up of their jaws you can see why they’re called tiger beetles. They've got spindly legs that keep them off the hot floor and enable them to run really fast. They sound scary but they’re so funny! They go blind when they run – they overshoot their prey and run in crazy zig zag patterns to be able to see better, they're hilarious.

I’m going to have to give number one position to the protagonist of my books: the rhino beetle. They look like they should be quite deadly, but they love bananas. They're very gentle, they love hiding. I’ve really fallen in love with them through writing about them.

Tell us more about the Beetle Collector’s handbook

It’s based on the cover of the Beetle Collector’s Handbook that was published 100 years ago. While I was doing research for Beetle Boy eight years ago, I wanted Darkus (the central character in Beetle Boy) to have a book he could refer to and when it took off, I saw there was a gap for factual books on beetles.

I’ve created a fictional entomologist called Monty George Leonard who wants to pass on his knowledge, it has a narrative as well as facts, there is a layer of Darkus’ own doodles and notation in there, to appeal to Beetle Boy fans. It’s written in the way I wish someone had taught me natural history, it’s got over 60 species of beetle, I’ve had it fact-checked by some of the best entomologists!

Andrea Beaty is the author of a series of books about curious classmates; Architect Iggy, Scientist Ada a...