All you need to know to confidently tackle common misconceptions, the science behind rocks and how to teach it to children in a way that they will really understand. 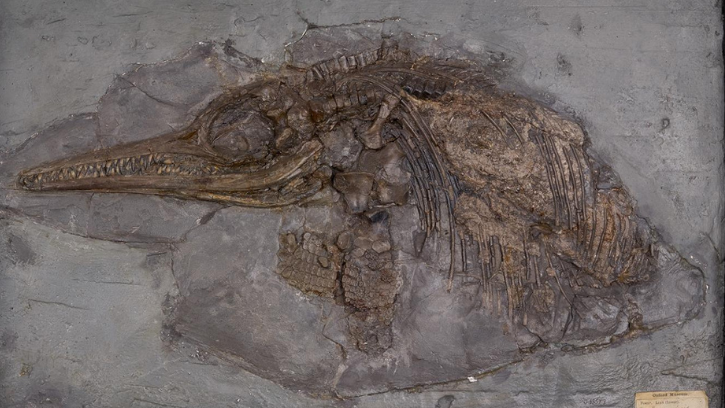 The Ichthyosaur found by Mary Anning (now on display at the Museum of Natural History, Oxford)

What do children need to know about rocks?

Pupils may have picked up a variety of ideas about rocks through their everyday experiences. Valuing their opinions and knowledge is important before developing it further by undertaking hands-on investigations and enquiries. Learning about rocks builds on prior understanding about the differences between things that are living, dead, and things that have never been alive. Before the topic, children may also have compared rocks with a variety of everyday materials, including wood, metal, plastic, glass, brick, paper and cardboard and begun to think about their uses. We have included some ideas for how to teach rocks in part two of this topic guide.

The rocks topic connects to your pupils’ learning in related topics and prepares them for the tricky topics evolution and inheritance. Children will then recognise that living things have changed over time and that fossils provide information about living things that inhabited the Earth millions of years ago.

Many of the misconceptions children have about rocks arise from the use of ‘everyday language’ when describing them. Although children in primary schools do not need to know all the definitions of geological terms, it is useful that teachers use them correctly. This factsheet from the Geological Society is a handy summary of the basic geology.

The terms rock, stone, and pebble are often used in an intuitive, non-scientific way and this can lead to confusion. To a geologist, the word rock is used for a category or type of rock which can be identified by what it was made of and how it was made. Rocks are naturally occurring solids and are not manufactured.

Another misconception that children often have is that rocks and minerals are the same thing. Rocks are made of one or more types of minerals. Minerals are naturally existing chemical compounds; they are the ‘ingredients’ of rocks and different types of rock have different combinations of them. Minerals can form crystals or grains/granules in the rock. The most common minerals in rocks are feldspar and quartz 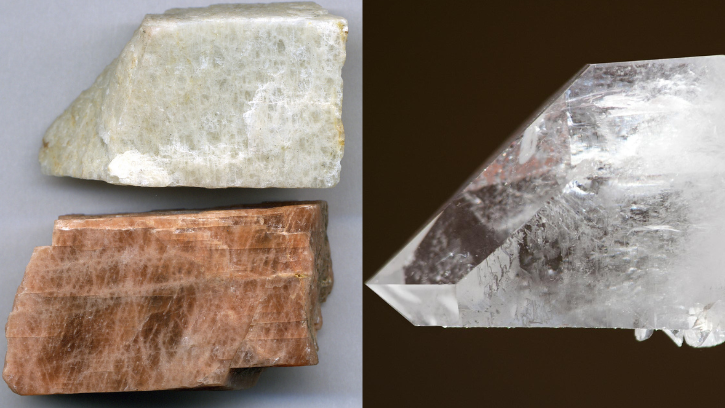 Examples of pure feldspar and an example of pure quartz.

Some rocks are made from interlocking mineral crystals that fit tightly together. Rocks with lots of crystals are usually harder and glint in the light. Other rocks seen to be made from layers; these are often gritty and break more easily. Many rocks are made up from broken fragments, or grains/granules, of older rocks and minerals which have been compacted together. Grains can vary in size and so rocks can be described as:

Rocks are made in three main ways which are summarised in this BBC film:

A fossil is the preserved remains or traces of a dead organism from a past geological age. Fossils are typically older than 10,000 years. There are several types such as footprints (trace) and insects preserved in amber (true form), but the most common way fossils are made is that they are mineralised; they are turned into rock! This process can be broken down into steps and is depicted on this BBC film and this Natural History Museum film:

A misconception that children have about soil is that it is dirt – just brown stuff on the ground! Soil is actually a complex mixture of organic matter (the remains of animals and plants that were once living in it) and the sediments of rocks (these have formed when the sun, wind and rain erode rocks). It contains channels of air and water and is a home for many invertebrates and microbes. Many of these creatures feed on the constant supply of leaf litter and create humus (dark-brown nutrient-rich compost).

Children need to be taught that the type of soil depends upon the rock sediment in the area:

The key vocabulary children will need to develop when learning about rocks, fossils and soils can be found in the downloads section of Explorify.

Now you have the tricky scientific concepts under your belt, try our ideas to help you explore rocks with your class in a way they will understand in part two of this topic guide!

Explorify – looks great, but how does it work? Guidance for ECT and ITT/ITE trainees.