All you need to know to confidently tackle common misconceptions, the science behind forces and how to teach it to children in a way they will really understand. 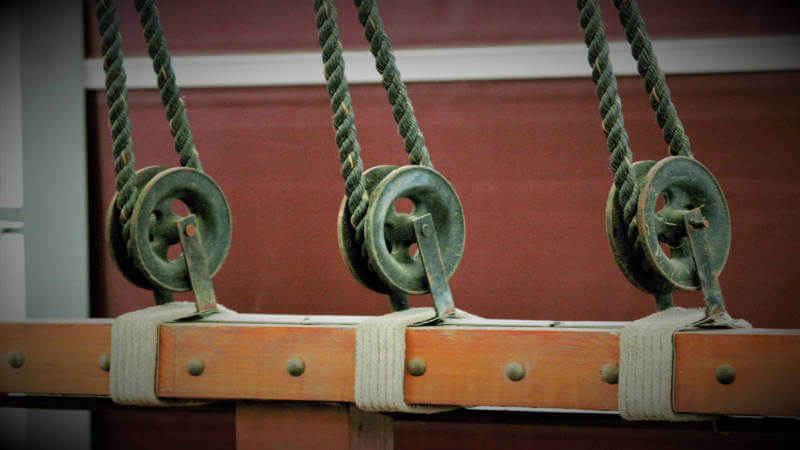 Three pulleys on the side of a ship

What do children need to know about forces?

Forces (including magnetism) is a tricky topic because of its abstract nature. Although the effect of forces on objects is observable, the forces themselves are invisible and therefore open to misunderstandings and misconceptions. Lots of play and hands-on investigation is the best approach, which begins with younger children exploring how toys and other objects move and can be manipulated. We have included some ideas for how to teach forces in part two of this topic guide.

1. The effects of forces acting between moving surfaces

A force is a push or pull on an object that causes a change in its speed, direction or shape. Forces can be divided into:

Forces come in pairs and no force exists by itself. Isaac Newton’s third law states that ‘Every action has an equal and opposite reaction’. This means that if you push on something (action) it pushes back (reaction). A simple example is when you sit down on a chair, you are exerting a downward force onto the chair and the chair exerts an upward force on your body. The action-reaction balance of the two opposing forces is equal.

The forces that are acting on an object at any one time vary in type, size and effect depending on the circumstances. A stationary object, such as a book on a table, has gravity acting on it, so the book pushes down on the table and the table pushes back against it. Gravity is an example of an action-at-a-distance force.

A moving object, such as a car on a racetrack, has more forces at work, including:

The size of each of these forces determines what happens to the car. The car can only move forward if the push force (generated by the car’s engine) is greater than the forces of friction, gravity and air resistance trying to slow the car down. Referring to Newton’s law, the faster the car travels, the more air resistance it will feel, which is why race cars are designed to reduce the effect of air resistance by being aerodynamic.

2. Magnetic forces act at a distance

Magnetism, perhaps more than the other forces, is the most difficult for children to fully understand because it occurs without contact or ‘at a distance’. It is important that children recognise the effects of magnetism but they do not need to explain what it is.

Magnetism is a force that we observe between metals such as iron, nickel and cobalt. These are called ferrous metals and it is their unique atomic properties that make them magnetic. Steel and stainless steel contain iron and that is why they are magnetic.

Not all metals are magnetic and are called non-ferrous. Aluminium, for example, which is used for drinks cans, cannot be magnetised.

Magnets used in schools are most likely to be iron-based. An electric current is used to expose the ferrous material to a magnetic field causing all the atoms in the material to align directionally. Consequently, every magnet has two poles, which we call north and south. When the north pole of one magnet is close to the north pole of another magnet, they repel each other because like poles repel. However, if a north pole of one magnet is near the south pole of another magnet, they are drawn together as opposite poles attract. 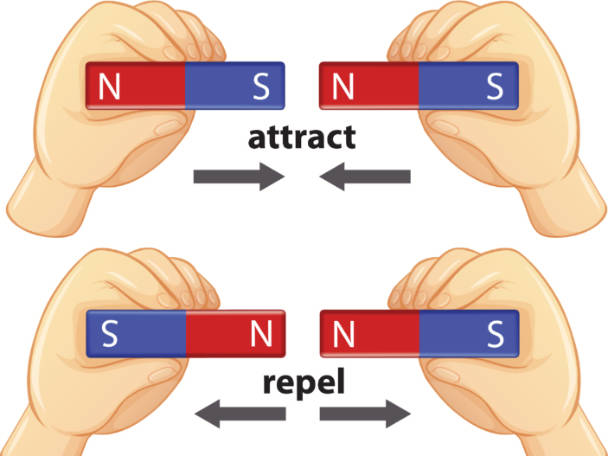 Some magnets are permanent meaning their magnetism is there all the time and cannot be turned on or off. Other metals can become temporarily magnetic when they are placed close to a magnet (within its magnetic field).

3. Gravity acts on all objects

The work of Galileo Galilei in the 16th century and Isaac Newton a hundred years later helped to develop the theory of gravitation. Gravity is the force by which all things with mass (including planets, stars, galaxies and even light) are brought toward (or 'gravitate' toward) one another.

Anything that has mass also has gravity. Objects with more mass have more gravity and gravity also gets weaker with distance. So, the larger objects are, and the closer objects are to each other, the stronger their gravitational pull is.

In our solar system, the force of gravity keeps all the planets in orbit around the sun. Earth's gravity is what keeps you on the ground and what makes things fall. Earth's gravity comes from all its mass, which exerts a pull on all the mass in your body. That's what gives you weight and means that you land back on the ground when you jump.

We could not live on Earth without gravity. The sun's gravity keeps Earth in orbit around it, at a distance that allows us to enjoy the sun's life-giving energy, light and warmth safely. It holds the atmosphere and the air we need to breathe around the Earth. Gravity also keeps the moon in orbit around Earth, which uses its own gravitational pull to pull the oceans towards it, creating our tides.

4. Some mechanisms can cause a smaller force to have a greater effect

Machines, of all shapes and sizes, are mechanical structures designed to help humans perform specific tasks. Most simple machines reduce the force you need to apply to lift or move a heavy object by making the distance over which you apply the force larger than the distance the object moves. Mechanisms like levers, pulleys and gears are common in many simple machines. They can all be used to make certain tasks (e.g., lifting, pushing, pulling etc.) easier by making a smaller force have a greater effect.

A simple example is on a mountain bike where the two sets of gears are connected by a chain. The gears are of different sizes and a cyclist can shift between different combinations of these gears (cog sizes) depending on whether they want pedaling to be easier or harder.

Now you've got the tricky scientific concepts under your belt, try our ideas to help you explore forces with your class in a way they will understand in part two of this topic guide!

You can also take a look at the related topic guides for materials and Earth & space.

Image credit: Three pulleys on the side of a ship by ranjatm via Pixabay

Ideas for how to explore forces with your class and explain it in a way they will understand.