At Home On Mars

At Home On Mars

Children are going to work together to think about what kind of shelter a human would need in order to survive on Mars. 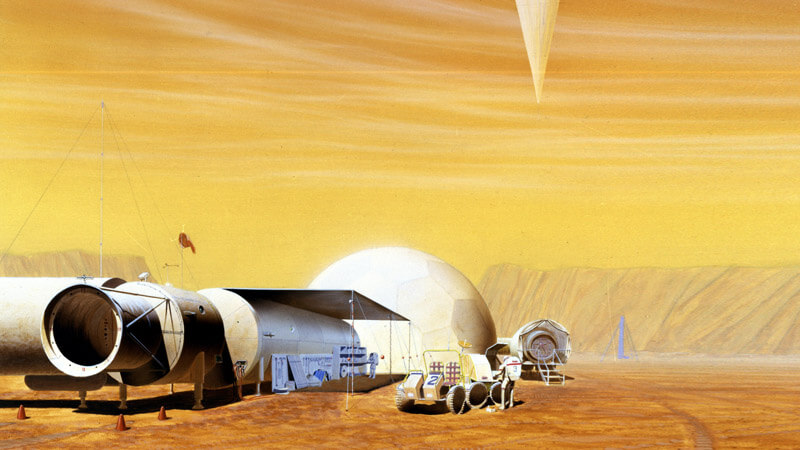 Plenty of junk material and other craft supplies as well as paper and drawing materials to support the design process.

Sometimes you have to solve a problem on the spot. Explain that today the class will need to make a home that would protect some humans that are living on Mars using just the materials provided. Discuss what pupils think they might learn from doing this.

1. Explain that the class will need to consider what humans need to survive in general then how that might be different on Mars. Then design a building that would fulfil these needs.

2. Pupils could work in groups for this activity - each pair could make different parts of the building, such as a bathroom, living room, a kitchen, that could then be joined together.

3. After 20 minutes, swap creations with another group. Continue working but this time on their creation. How can you improve it?

4. After 10 more minutes, survey the final creations. What have they learned from swapping projects?

How to run Problem Solvers activities

If humans ever live on Mars, they will need to carry a lot of what is needed to build their homes with them from Earth, so the materials are going to have to be light and easily transported. Ideally, they will also be modular so that larger buildings can be constructed from parts that have already been built on Earth. The advent of 3D printing might mean that it would also be possible to construct some of what is needed from local materials.

As well as containing all of the living space that people will need, the building will need a place for the machinery that is needed to extract water from the surface of Mars and also to create oxygen using some of the water. There will also need to be a place to grow plants and a place to raise insects, which would be a fast-growing form of protein. The buildings would be partially submerged beneath the surface of Mars, as this would help to insulate the building and would also protect it from the sun’s radiation.

Watch What's Going On? Hostile world to get a taste of what life is like for people living in an extreme environment and get some inspiration for designs! Children could be encouraged to think about how the plants that are grown in the building would be transported to Mars. The Mystery Bag activity ‘Seeds of Life’ could be used to support this. Take a look at STEM Learning's Mars Mission: Building on Mars.

There is also scope for literacy links as children are encouraged to think about what it would be like to live in a place like this. They might take turns to be a reporter interviewing someone living on Mars from a video link back on Earth and a scientist who is living and working on Mars.